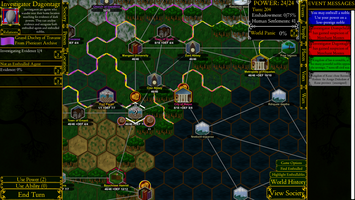 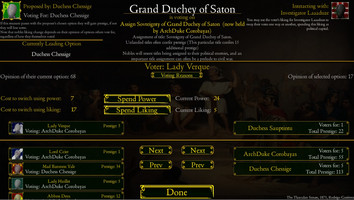 So, after a lot of work, Version 7 is now available.

Two major core changes are introduced in this version.

The first, and simpler, is the voting screen. This overview of the society's voting process allows you to quickly go through all voters and see who can be swayed and who needs to be swayed in order to get your chosen motion through. It is a far cleaner and smoother approach than before, and the costs are a direct function of the noble's preferences towards separate options. If they barely care which of two options wins, they will easily be convinced to change their vote. If, however, they are strongly decided on an issue, it could be impossible to change their opinion through political arguments and favour, and very expensive to do so through magical means.

Hopefully this will make the politics game far smoother.

The far more complex introduction is that of agents. These are units which move around the map, accomplishing tasks. The exist initially as NPCs, belonging to the various nations, but can be enthralled (max 2 for now) to bring them under your control. Agents play a game of intrigue, needing to avoid attracting too much attention if they want to continue to be able to operate freely in a nation.

Agent actions which involve dark powers will leave behind evidence. This will be discovered by investigator agents, who will report it back to the nobles of their nations. They can be slowed, using powers and other agents, but will eventually get the message out, barring extreme circumstances. Once they do, you can try to plead your case with the nobles, buying you more time to complete your activities before the nobles choose to exile you.

The investigator is the more common one. They are a primary threat to your agents, as they discover evidence, and can spot your agent and enthralled noble if they are in the same location. Disrupting these agents may be crucial to the safety of your own forces.

The merchant was introduced following popular request. They have their own commerce mechanic, which revolves around buying goods from your home nation, travelling to foreign nations and selling the goods. Again, they will need to avoid hostile investigators (if investigator suspicion is enabled in main game screen), to remain able to perform their activities. Once they have generated a supply of wealth, they can spend it in a human settlement. This will bring prestige to the local noble, who will like the merchant in turn. This can be used to make solid allies, letting you use the new voting screen to use the merchant's favour with the noble to swing a key vote. Alternatively, you could boost the prestige of your own enthralled noble, to more easily secure them a duchy or queendom.

As always, there may be bugs here and there, please do leave any feedback and features suggestions, and I'll see what's workable.