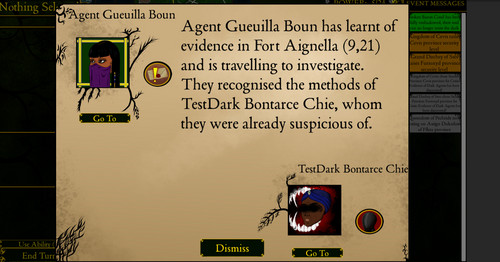 User feedback was to get a better narrative structure into the game. What does a good narrative need? Characters, both protagonists and antagonists. Which is which is a bit blurred in this context, but that's for you to decide on. This has been in planning for a while, and we've been working up towards this. This post sums up our thinking with regards to making interesting agent characters.

A name and a face

What does a character need? Firstly they needed a recognisable name and face. Hence the previous update, which dealt with that, as well as the update to the naming scheme which slightly reduces their length so they're not such quite a mess of syllables. They also have a House to belong to, so they can have some relation to the nobles of the world, albeit not in a way which really affects gameplay.

Your own agents handle things based on your orders, but the human agents can change over time. This update introduces more complex specialisation. Agents start in the "Standard Agent" form, which is a general purpose unit capable of doing anything, but not very well. When a society detects something it needs to deal with (currently a war/potential war or evidence being left behind), it can vote to promote one of its agents. Any agent in standard agent configuration can become a specialist, and any specialist can be returned to standard type. Currently there are only investigators and knights (with paladins being a temporary form of investigator), who handle enemy agents and enemy military forces, but hopefully we can at least introduce medical specialists (to combat plagues, when they're introduced).

This gives agents a tiny career path, whereby a society has a set of agents to start with (probably a mix of standard agents and knights), discovers your agents' work, and decides to promote someone to investigator to deal with it. This means that character has now got a history with your agent, as their career was changed in response to your actions.

This system ties into existing, with the nobles' ideal of how agents should specialise being determined by their threat evaluations, and the process taking place by voting, so the player can affect stuff somewhat, and it's nice and organically meshed into existing frameworks, which I personally like form a design standpoint.

As mentioned, an investigator will exist because one of your agent left clues behind. We're trying to get the number of relevant agents down, and make their one-to-one relationships matter more. An investigator is more likely to track down an agent they know of, forming distinct rivalries between your agent and individual pursuers. The basic path is for an agent to be a standard investigator, then to find clues, get promoted, have a declared hostility to your agent, track down more clues, get promoted to paladin, then begin chasing the individual agent across the map. They may well only know of one of your agent, and be entirely friendly with others.

Hopefully this will make individuals matter. Particular agents of yours will have particular human agents they are hostile to and need to respond to and keep track of.

Finally your agents can actually deal with enemy agents in a fashion which isn't running. They're not particularly amazing at it, but they can inflict damage on enemy agents. You'd need all of them present to take down a hostile unit, but the human agents will retreat once they take sufficient damage, and return to their societies to heal. They can't be damaged if one of their armies is present (including one embedded into a location), so are very hard to kill inside their own nation, but it does mean you can get the paladins off your trail for a bit. Perhaps in the future you could gain agents who specialise in killing human agents. One idea I like is to have a dark forest outside human society haunted by a creature which can't enter civilisation but will track down and kill any who venture into the wild spaces.

To avoid spam and to make individuals more memorable they should have a degree of endurance. Dark agents are getting buffed by allowing them to heal, and by giving them the ability to change their name. Name changing allows them to re-enter places they were exiled from, but the hostile agents will still remember them. In exchange the frequency with which you can recruit new agents is reduced, so they are more valuable.

Hopefully, all this will add up to a more personal and memorable agent experience, and make them individually relevant.

Once all this is done, we can finally put in the suggested feature of having agents have a sanity meter and allow the seeker to leave clues behind to drive them insane. Like that you can be tracked by a lunatic whose mind was broken by the terrible truth, leading them to periodically ruin the lives of their fellow investigators as they desperately try to stop the apocalypse your agents are labouring towards.

Anyway, this release is still a while off, possibly timed to release alongside the Steam release, possibly before. Steam is taking forever, as we wait for the IRS to get back to us, then to go through Valve's own internal stuff, so we will see.