Work continues on adding agents into the game.

It's required a bit of an overhaul of a number of systems. Firstly a whole new voting screen has been added in, where both your enthralled noble and any agents under your control can spend either power or liking to sway voters.  This is far more fluid and natural than the previous way of trying to get people to vote your way, as it takes into account the person's exact liking for every option. It is therefore cheaper to get a person to change if they like both options nearly equally, and nearly impossible to get them to change their opinion on something they care massively about (economics).

It's fairly easily to just cycle through people to find cheap votes, and to determine who needs to be bought to win a given election. It's also far faster in terms of turns, so the societies can vote more frequently. In return, I've suppressed some of their voting, so they don't hold elections 24/7, so the player isn't swamped with an infinite number of things they don't care about. 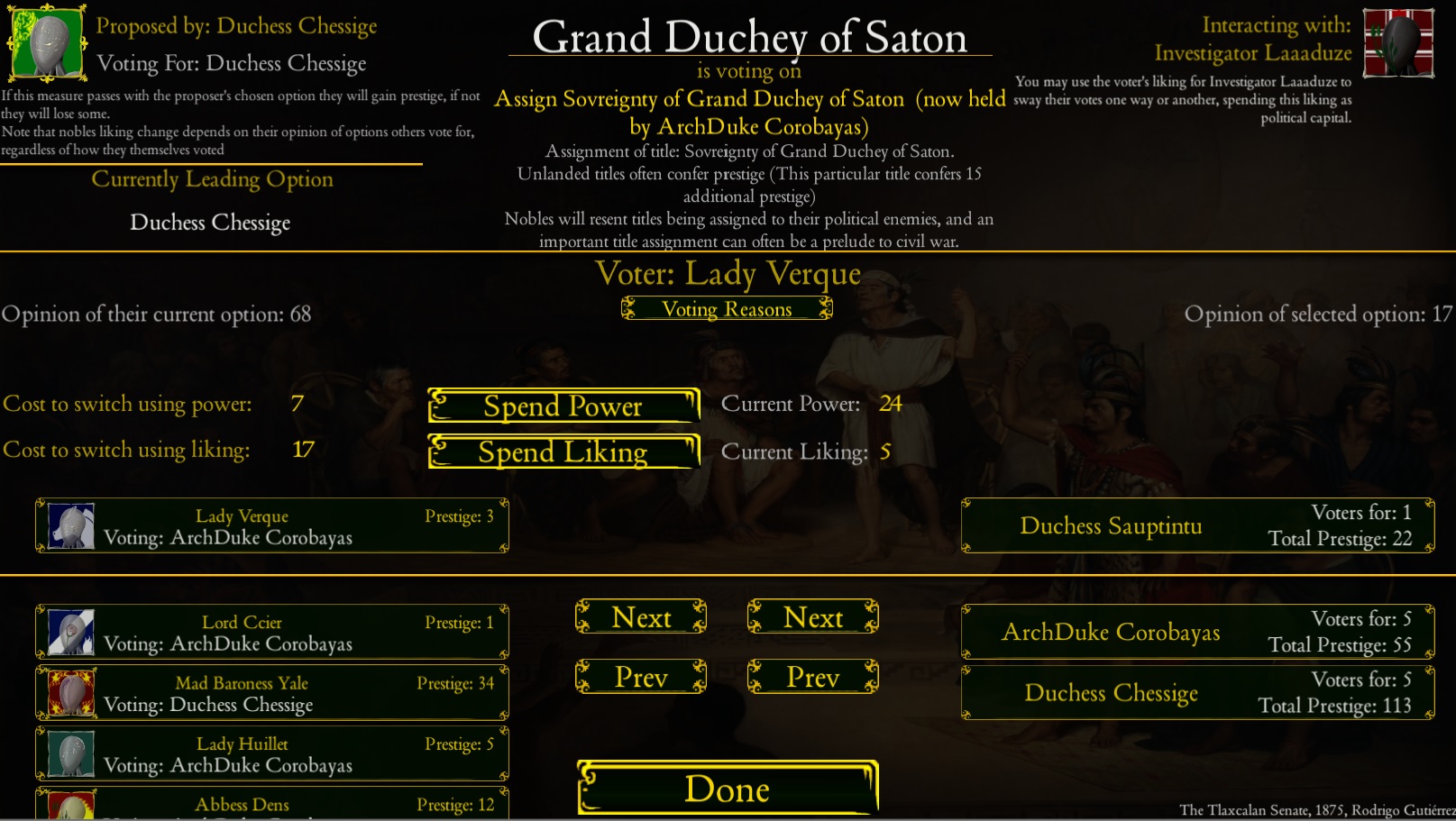 Agents can therefore take part in voting. Hurray. Allowing you access to elections in foreign lands (although I might also allow voting without agent, forcing you to spend power only).

On the map screen, agents can already wander around and do battle. The first type of agent we've got is the "investigator". These look for clues, dropped by other agents, and build up suspicion from them. They can discover your enthralled agent, and warn nobles about them, or fight them directly. Nobles can vote to condemn an agent. If they do, that agent will take damage every turn they are in the hostile nation. Naturally you can get an enemy agent kicked out of a nation through the same voting system, creating safe areas for your agents to work in.

As seen below, the map updates to warn you exactly who is hostile. Selected is a "Investigator Pelain". Their nation is displayed by their little flag, and this nation is at war with the duchy to the south.  Since they're at war, the nation is hostile, and is nice and red for easy warning that they'd die if they went in. To their left, in the ocean, is another investigator belonging to that duchy. They are also hostile, due to the war, so their border is now red and spikey. It turns yellow if they are non-hostile but suspicious, so you can quickly see who hates which agent.

On the whole, I'm very optimistic about agents. They seem to have a great potential, and work well with existing politics systems. Possibly in the future they'll be the major thing players interact with, and the enthralled agent will simply be a thing you interact with once every few turns as part of your endgame victory, while playing cat and mouse with hostile agents.

Investigators are the first agent to go in as they're important for the evidence/suspicion system, but following discussion with players I agree other types should be involved.  Each agent type would have a few powers/abilities to use, and merchants (the consensus favourite neutral character) would possibly be good at making nobles like them, letting them spend this liking in the voting screen. The investigator might do some archaeology, digging up ancient artefacts from the deserts and wastelands. Maybe add princes/princesses who have a lot of liking from one single noble (their royal parent), and are good at combat but not much else.

We'll see. Lots of work to do, but progress seems to be going well.