After a considerable amount of work, almost amounting to a full rebuild of the game (only C# scripts were transferable), the game is rebuild in an old enough version of Unity for the save game code to work. It seems to work, but fails in the editor occasionally, so we can't guarantee it is fully stable as of yet. However, to break the rather long silence, we are releasing a build of version 2.

Save/Load. Currently only a quicksave system, with a single slot, but a great improvement over not having any saving system. We aim to improve it in later versions.

Game difficulty and custom seed screen. A first-draft version of a game options screen. Soon we hope to introduce a fully editable text file for all the options inside the game (so the enthusiastic player can alter any paramter value), as well as expansions to this main game options screen.

Sanity/Madness. The nobles now all possess a sanity score, which if it reaches 0 turns the noble insane. Three types of insanity currently exist, and are intended as a 'soft assassinate' ability, reducing the noble to a point where they can't maintain their position in society. This may need balancing, but is a look at how this system is intended to function.

Traits. Nobles now have traits, which change how they behave somewhat. This was introduced in an attempt to make nobles different one from the other. Now there's an advantage to getting one noble into a position of power vs another. Perhaps one presents a threat and must be removed, while another is a useful tool who's trusting nature blinds them to the true threat.

Sadly this work has yet to be finished. For some reason the version of Unity we are using does not possess Linux build support. We'll need to investigate how to resolve this issue, while retaining the save/load capabilities. 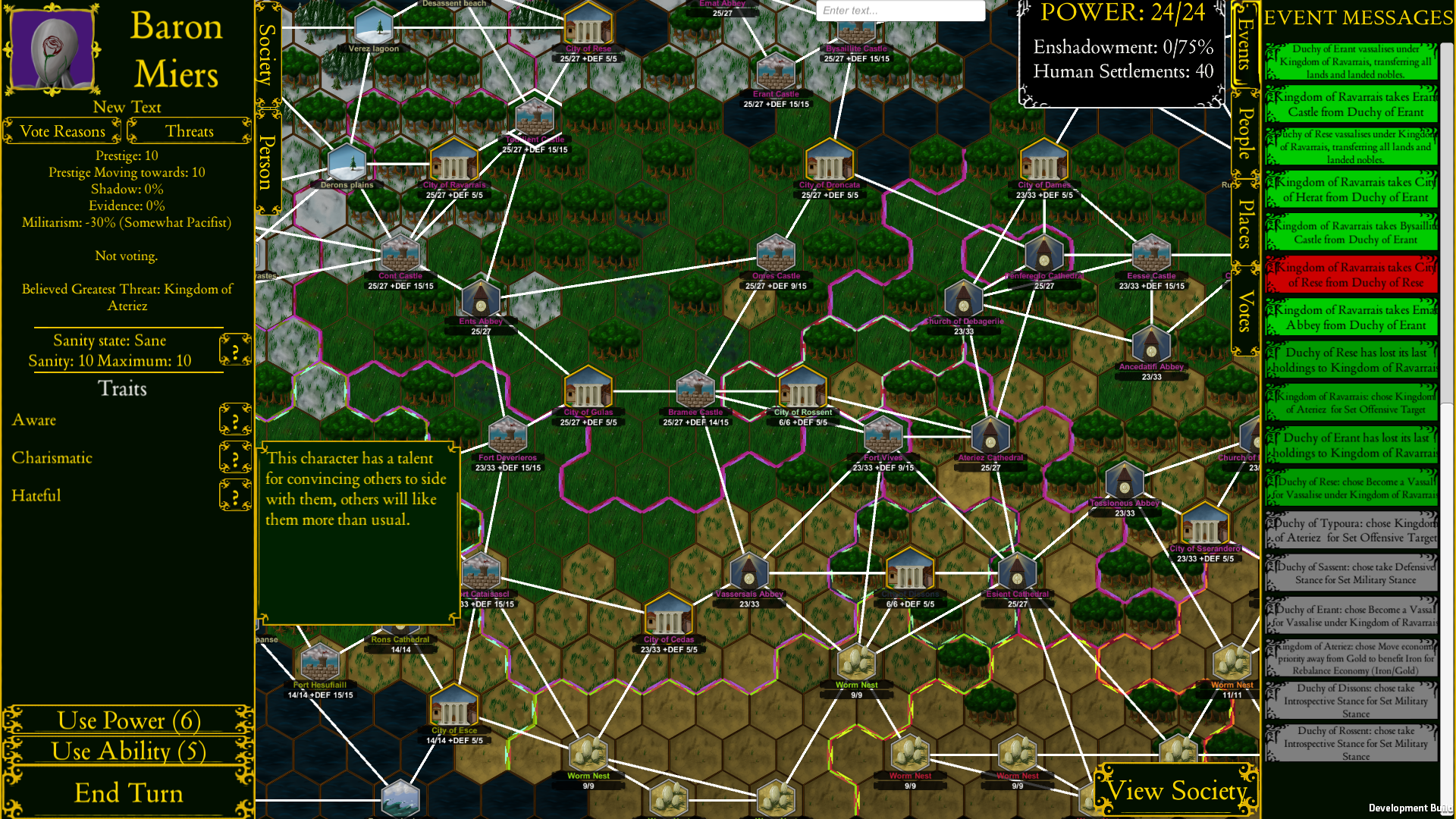 Looks very nice. I have just played a pew turns and have noticed a bug - I dont know If you are aware of it or if there is a place for reporting bugs, so I will just say it here. The tool-tips for the traits work fine, unless the nobles have three traits, then the third traits tool-tip text will be describing the second trait instead of the third one. I have added a screen shot for refernce.

Othrewise good progress on the game, look much cleaner, I hope you will manage to add back the history button.  :)

edit(feck the picture didnt upload, oh well just tell me if you need it and ill try again)

Thanks for the update. Looking forward for the Linux build. Following many indidev , it seems Unity has so many issues everywhere... I guess it's good to have a very popular engine, but it may make it "lazy".